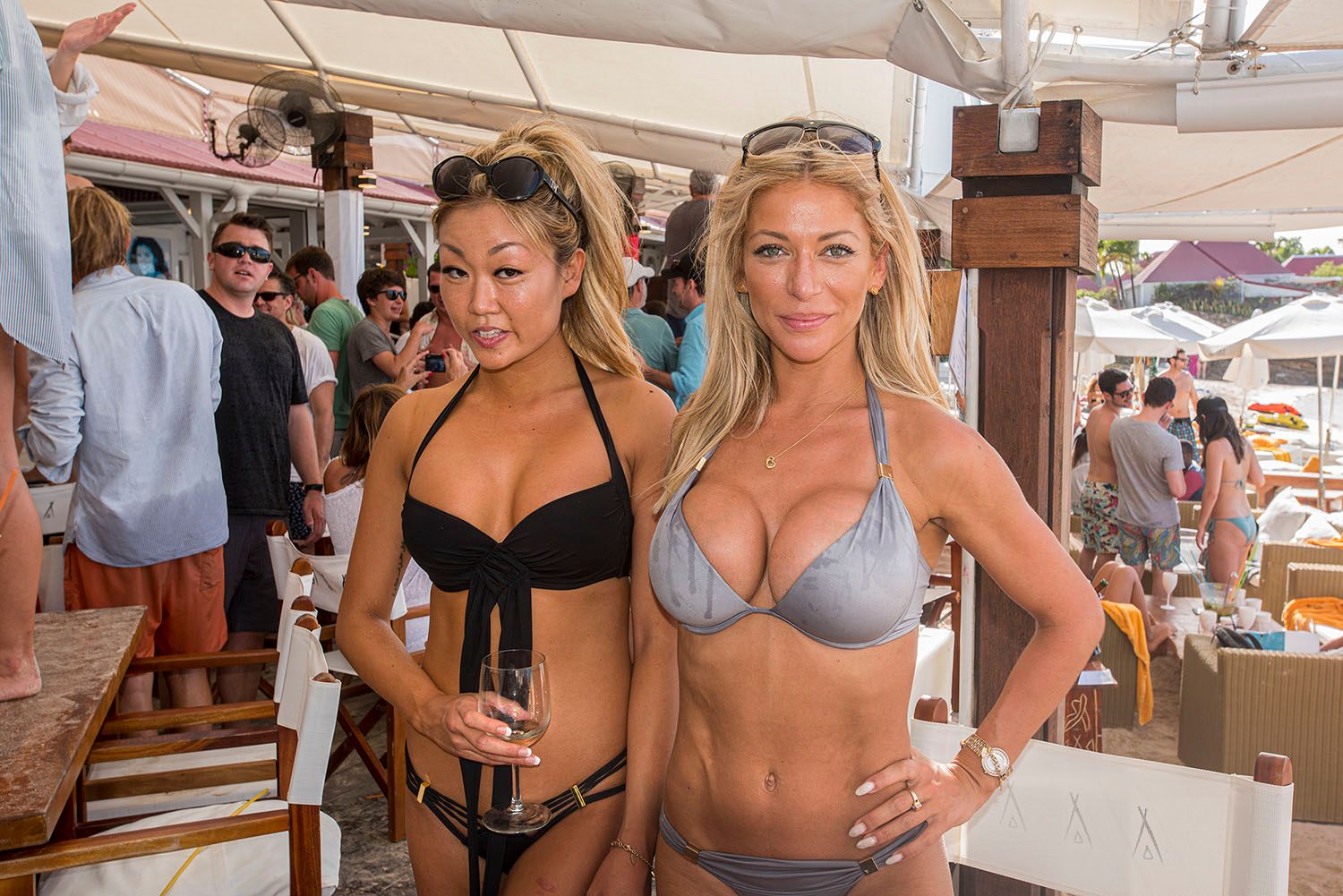 1:00 pm in the afternoon never looked so promising and debauched.

Having never been to Nikki Beach before or for that matter on St Barts, I wasn't quite sure what to expect. Arriving for lunch with friends and recent acquaintances in mid-March, we started with a round of Rosé wine which seems to be the standard drink in St Barts, often ordered and served in magnum size bottles. Followed quickly was 2 large platters of sushi and salads and more Rosé. To be able to find so many freshly prepared foods on a small island in the middle of the Caribbean Sea is quite amazing. As we began eating under the outdoor tent, there were another 20 tables filled with fellow diners enjoying the warm sea breezes and music wafting in from the DJ booth.

Somewhere during our meal, the overall noise level began to build. Loud talking and laughter driven by an excess of alcoholic drinks while the music slowly notched to a higher volume. A young hipster hired by the club brought out his saxophone and started to play along to the DJ soundtrack. Before long, he was on a table wailing on the sax but surprising to me, he was joined by fellow diners of men, and women dancing on the surrounding tables still filled with dishes of food and glasses of wine. As the name Nikki Beach indicates, this restaurant sits on a beautiful sandy beach drenched in turquoise waters and extends past the outdoor restaurant onto the beach itself with lounge chairs and umbrellas for the guests. Casual dining to say the least as many of the patrons wore bathing suits, going back and forth from swimming in the sea to joining friends eating drinking and dancing on the tables.

I eventually noticed two women being part of the lunch crowd. At some point they both got up on a table and started to dance for several songs with the saxophone player. Clearly they loved the attention they were getting from the men and women in this restaurant, and which healthy heterosexual male wouldn't notice them? I asked if I could photograph them and they looked deep into my lens and posed for the camera. BTW: 1/ Love the guy in the back with sunglasses looking on and wondering what is happening. If only he had a camera or yacht, these bimbos would pay attention to him as well. Situations like this could easily go bad if their dates seemed offended and thought I was paying too much attention to them. On the other hand it would validate their choices of women when other men were paying attention to these women and their assets.

In summation: 1/ hanging out with a bunch of alcohol-infused people on a beach resort island in the middle of the day, listening to the DJ, eating lunch, watching the hedonistic tendencies of the well to do while drinking a never-ending flow of Rosé seemed like a perfect way to spend a few hours. 2: If one needed an excellent carpenter, I would definitely have asked the establishment who had built these tables because how did they support 4-8 dancing adults without crashing to the ground was a feat unto itself. Maybe it was a lucky afternoon for the tables and even luckier for those dancing the afternoon away on top of them.

* Disclaimer: Unless I am purposely photographing a woman specifically as a part of a study on shape and form than I will not 1/ exploit a person's sexuality for the sake of gratuitous enjoyment unless the woman has consented or given acknowledgment for approval to being photographed. Exploitation for the sake of a quick giggle or easy shock is wasteful and disrespectful to my fellow human beings. 2/ The image has to go considerably deeper and begin to articulate a more interesting cultural narrative, conversation, and perspective.